An Uztaz will come to the venue or home and provide the following services.

Please change the quantity accordingly, discount will be reflected after Add to cart:

Aqiqah Services
We can schedule the Aqiqah on the 7th, 14th or 21st day after the birth of your baby.

Evidences
Sahih Bukhari Book 66. Sacrifice on the Occasion of a Birth (Aqiqah), Narrated By Salman bin ‘Amir Ad-Dabbi I heard Allah’s Apostle saying, ‘Aqiqah is to be offered for a (newly born) boy, so slaughter (an animal) for him, and relieve him of his suffering.”

(Note: It has been quoted in Fateh-al-Bari that the majority of the Religious Scholars agrees to the Hadith narrated in Sahih At-Tirmidhi that the Prophet (Peace be upon Him) was asked about Aqiqah and he ordered 2 sheep for a boy and one sheep for a girl and that is his tradition “Sunnah”.)

Benefits of Aqiqah
One is the announcing the birth of the baby. Being bestowed a child is a great blessing from the Creator.
Another purpose is inviting family members, neighbours, and friends to celebrate the blessed occasion.
Opportunity to feed the poor in the celebration by offering them food and meat served on this occasion.
Imam Ibn Al-Qayyim, may Allah have mercy on him, states: “Among the benefits of Aqiqah are:

It is a sacrifice by means of which the child is brought close to Allah soon after he comes into this world.
It is a ransom for the newborn so that he or she can intercede for his parents.
It is a sacrifice by which the newborn is ransomed just as Allah ransomed Prophet Ismail 'alaihis Salam with the ram.
When should Aqiqah be performed?
It is recommended to perform Aqiqah within the first week (and ideally on the seventh day) if not possible, then in the fourteenth, if not, in the twenty first, if not, then at anytime. In addition, it is the recommended Sunnah for parents to give Sadaqah of equal value to the weight in gold of their baby’s hair (when it is shaved on the seventh day after birth).

What Will I Get

We accept the following payment methods:

Click on this link or go to https://vimeo.com/461318439/7320cdbfe7#t=55s view the video on How to Pay via PayNow. No mobile number or UEN number will be provided. Instructions will be shown during checkout.

If you are using a computer to checkout:

Step 3: Scan the QR Code displayed on the computer screen and follow the remaining instructions

If you are using a mobile phone to checkout:

Step 1: At the payment page, capture a screenshot of the QR Code.

Step 4: Select the screenshot of the QR Code that you captured earlier and follow the remaining instructions

How to Calculate 7 Days After Birth 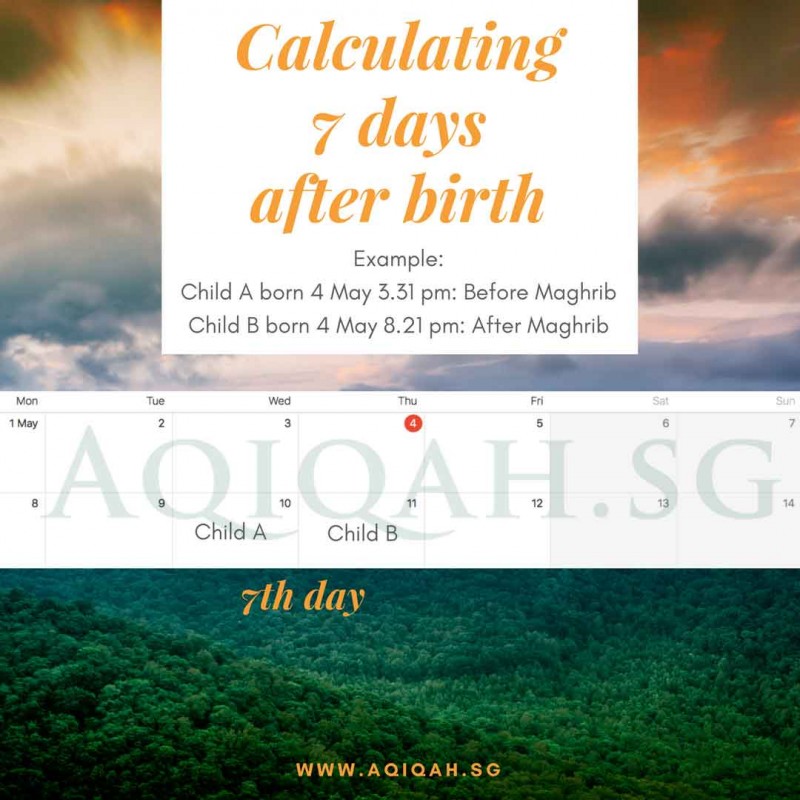